Edit
This article is about the character in Shadow and Bone (TV series). For the book character, see Alexei.

Alexei Stepanov was a junior cartographer's assistant. He first appeared in the episode A Searing Burst of Light and was shot to death by Dreesen.

Alexei was a member of the cartographer unit of the First Army, working along with others, including Alina Starkov. He would repeatedly assure Alina was Ravkan, when others would insult her for her Shu heritage. Originally assigned to go south, the cartographer unit was reassigned to the skiff go through the Fold after Alina secretly destroyed the maps to the other side. When the skiff was attacked by volcra, Alexei panicked and abandoned the skiff. As he ran, he was knocked over by a force of light, that destroyed the volcra in the immediate area. Looking back, he saw that Alina was the source of the light, the Sun Summoner. Because of Alina, Alexei was safely able to reach Novokribirsk on foot, when he collapsed after exiting the Fold.

However, he was soon taken prisoner by Dreesen, and brought to Ketterdam. Kaz and his team brought a Heartrender to Dreesen and she used her abilities to keep him calm and he retold his account passing through the Fold, revealing Alina Starkov to be the Sun Summoner. Once he was finished, he asked to be freed and Dreesen shot Alexei through the head, killing him. 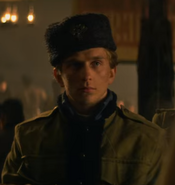 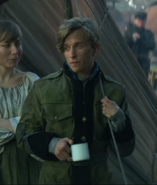