Edit
This article is about the character in Shadow and Bone (TV series). For the book character, see Dubrov.

Dubrov was a tracker in Mal's unit in the First Army. He was good friends with Mal and Mikhael.

Dubrov joined the First Army at some point in his life. He was very good friends with Mikhael and Mal. He, along with Mikhael assisted Mal in tracking Morozova's Stag because they didn't want Mal to go alone. However, right before Mal came face-to-face with the Stag, the trio was attacked by Fjerdens. Unfortunately, Mikhael and Dubrov didn't make it out of the fight alive.

Dubrov was a loyal friend, and would often make people laugh.

As part of the First Army, he received training as he was a member of the tracking unit.

He seemed to be very good friends with both of them, as he was seen joking with them. He was worried for Mal's safety and didn't hesitate to accompany him on the mission to track the Stag. 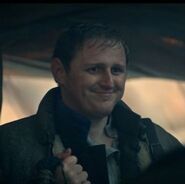 Andy Burse and Angus Castle-Doughty, much like their onscreen counterparts Dubrov and Mikhael are best friends in real life and produced a short film called "Two's A Crows" together which they also starred in.

Community content is available under CC-BY-SA unless otherwise noted.
Advertisement