Edit
This article is about the character in Shadow and Bone (TV series). For the book character, see Genya Safin.

Genya Safin is a Tailor for the Queen of Ravka who was tasked with spying on Alina and poisoning the King.

Upon Alina's arrival at the Little Palace, Genya is tasked with making her presentable for the King. Genya reveals that she is a Tailor and the Queen's servant. She can fix, as well as modify. She's almost as rare as Alina. After getting rid of the staff, Genya heals Alina's surface wounds with the exception of a scar on her left hand, which Alina reveals is a reminder of home. Genya then proceeds to do Alina's hair and makeup. Alina inquires about Genya's life prior to the Little Palace. Genya reveals that testers found her when she was 11. That's when General Kirigan gifted her to the Queen. But she's been working on herself since she was three years old.

On their way to meet with Kirigan, Genya tells Alina that the King cares little for mud, blood, or sacrifice. He is expecting to see a humble girl plucked from the ranks of his army and will want to take credit for Alina.[1]

Genya prepares Alina for horseback riding with General Kirigan, during which time, Genya informs Alina that Kirigan sent Zoya away after she attacked Alina during combat training. At the general's behest, Genya gifts Alina a black and gold kefta — the color of the Darkling, however, she decides to wear her ordinary blue kefta when joining him.

Genya joins Alina in her room late one night to remove the scar on Alina's hand at her behest despite initially instructing Genya to leave it.[2]

Genya prepares Alina for the Winter Fete as she tells her about the Queen's insufferable requests. She woke before dawn and demanded that Genya touch up her before the rest of her team arrived. Alina jokingly offers to blind the Queen during her demonstration. Genya chuckles, but admits that she doesn't mind, as it tends to shift the King's gaze in his wife's direction, at least until nightfall. The general insisted on black for the performance, but perhaps after, Alina could return to her blue kefta, Genya proposes. However, Alina prefers black. That being said, Genya warns Alina to be careful of powerful men. David joins them with a pair of gloves to help Alina during her demonstration at the Fete, but Alina insists that she'll perform well enough without them. After David exits, Alina realizes that Genya likes him.

Genya reluctantly takes Alina outside the Palace to see the performers. There, Fedyor approaches with his best impression of Ivan, monetarily scaring the girls before leading them back inside.

After Alina's performance, Genya returns to the fitting room, where Marie, who had been tailored to look like Alina, is attacked by the Conductor. Genya disarms the man of his blade, but he then shoots her before fleeing. Protected by her bulletproof kefta, Genya rushes over to Marie, who with her final breath, asks Genya to put her back, as she doesn't want to die with the wrong face on.[3]

Conspiring with the Darkling[]

Genya, in her new Corporalnik red kefta, reunites with Alina at camp and informs her that the King has fallen ill and the Apparat has been ruling in his stead, while the Queen has been confined to her quarters. Alina recalls Genya mentioning that General Kirigan gifted her to the Queen when she was 11 years old, leaving Alina to suspect that Genya is one of General Kirigan's spies and that she poisoned the King. Genya reminds Alina that she warned her to be careful of powerful men. Genya explains that she didn't have a choice. She was a whipping girl for the Queen and a Grisha without a color. She didn't have the luxury to choose friendship over survival. Genya used to struggle to fight the King off, but it never worked in her favor. So she waited for years to get her revenge. While Alina agrees that the King deserves every bit of Genya's vengeance, she doesn't believe that General Kirigan deserves Genya's loyalty.[4]

Given her ability to Tailor, naturally Genya pays close attention to details, and is enthralled with beauty and perfecting any insignificant blemish within her own appearance.

Genya is capable of reading people and understands how social structure in her environment works. She is extremely loyal to Kirigan, and is willing to go along with his plans.

Genya is an exceptionally skilled Tailor. She discovered her powers when she was merely three years old and states that she has been working on herself ever since. She erased several minor cuts from Alina's face and body by simply running her thumb over them, and later even removed a scar on Alina's palm that was nearly ten years old. She has a small jewelry box full of stones, dried flowers, and other objects that she can use to replicate certain colors and finishes while tailoring others, such as when she used the iridescent blue shell of a dried beetle to create and place the same color on Alina's eyelids, or when she used a small rosebud to darken the color of Alina's lips. Genya was also shown to undo her work by also running her thumb over the changes she had made. According to Genya, these changes only last a few days without continued maintenance unless she herself reverses the effects.

The most remarkable use of her powers was when she completely changed Marie's face so that she looked exactly like Alina to aid in her role as a decoy during the Winter Fete. When Marie was dying after an attack by the Conductor, Genya was able to undo the illusion by waving a hand over her face.

Much like in the Shadow and Bone Trilogy, Genya has an inexplicable crush on David, who barely ever seems to even notice her or anyone outside of his own studies. 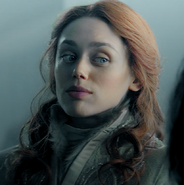 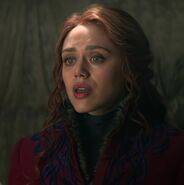 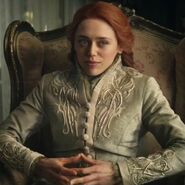 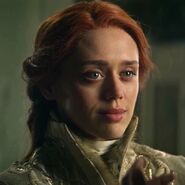 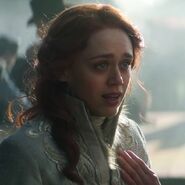