This article is about the character in Six of Crows Duology. For the Netflix adaptation character, see Inej Ghafa (Netflix).

Nina: "You may still die in the Dregs."
Inej: "I may. But I'll die on my feet with a knife in my hand."
— Nina and Inej on joining the gang.

Inej Ghafa is a member of the Dregs. She works as the Dregs' spy. She is of Suli heritage and was raised performing with her family as an acrobat.

Inej is of Suli origin and as such, has brown skin and dark brown, almost black, eyes. She has oil black hair which is bound in a braid but is long when left loose. She wears breaches, tunics, and quilted vests in dark colors. While doing work for Kaz, she wears a hooded cloak. Inej is lithe and muscular but is shorter than most of her companions.

Inej is mostly known for her reserved nature. She is mentally incredibly strong, and goes for her own aspiration, without hesitation. She is quiet and morally unwavering, unafraid to speak her opinion when she feels it is needed. She is skeptical of most people but is not outwardly harsh, and willing to offer her friendship to those who have proven themselves to be good people. Inej is incredibly traditional, often reciting Suli proverbs as advice and general commentary. She feels more secure with knives in her possession, preferably her own, and takes comfort in the strength of her title, "The Wraith".

Inej's family were traveling acrobatic performers, and she grew up traveling around Ravka in caravans and performing with them. She learned to walk the high wire barefoot as a child.

A few days before she turned 14, she was with her family on the west coast near Os Kervo performing in a carnival. Inej was awakened from a nap and captured by slavers early one morning and subsequently sold to Tante Heleen, an owner of a pleasure house in Ketterdam, where she was forced to work in the Menagerie as an Indenture.

When Inej first met Kaz Brekker she overheard him talking to Heleen asking her for information about her clients. Inej later approached Kaz and offered to help him but he did not respond and walked away. Kaz returned the next day to buy her contract from Heleen and gave Inej the choice to join The Dregs.

Inej has custom Fabrikator-made leather slippers with coarse rubber soles. They are perfectly fitted and can grip any surface. She also has brass knuckles on her right hip, climbing spikes, and pads on her knees for crawling and climbing. The pads also hide blades that are activated by a trigger on her ankles.

Inej has many knives, all of which are named after Saints. The ones hidden in her forearms have quick releases: Sankt Petyr on her right hand, her first knife given to her by Kaz, and Sankta Alina - a knife with a bone handle. Sankta Marya and Sankta Anastasia are on her thighs, Sankt Vladimir in one of her boots and Sankta Lizabeta (with a rose-engraved handle) on her belt.

At the end of Crooked Kingdom, Kaz gives her a boat to hunt slavers with, because that is what she always wanted.

Because of her background as an acrobat, Inej has excellent climbing skills, agility, and body coordination. She also has a gift for stealth, never making any sound as she moves.

For all his selfishness and cruelty, Kaz was still the boy who had saved her. She wanted to believe he was worth saving, too.

Inej and Kaz form an extremely close relationship over the two years she works for the Dregs. Kaz comes to trust her and relies on her and her abilities. Despite Kaz's rough and brutal reputation, Inej believes Kaz has a good heart deep down and continually validates this by pointing out actions he's taken for others that he didn't necessarily have to.

Despite Inej's reciprocation of Kaz's romantic feelings toward her, Inej continues to put her life goals above her relationship with him. Kaz also continually denies his feelings for Inej. When Kaz asks Inej to stay in Ketterdam with him, she is conflicted as Kaz keeps his walls up and she would not “settle for so little.” She tells him he needs to be a better person and open himself to her before they can pursue a relationship.

Jesper and Inej work together as members of the crow club. They form a close friendship and show immense care towards each other. They have a mutual understanding of each other and have respect for each other. Throughout Six of Crows and Crooked Kingdom, Jesper battles an addiction to gambling and Inej is the one to open up his eyes and help him take the first step to remedy his gambling addiction.

Inej recruited Nina to the Dregs after Kaz heard of her, and ever since they have formed a close bond of friendship. When Inej is stabbed in the battle when the crows are escaping the Ketterdam harbor, Nina nurses her back to health. The two trust each other immensely and take comfort in each other's presence. 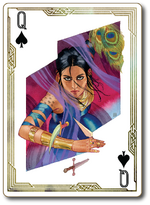 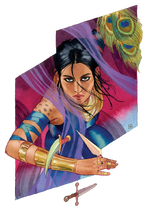 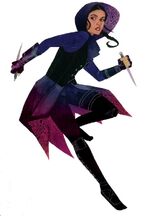 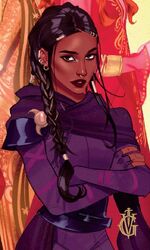 Retrieved from "https://thegrishaverse.fandom.com/wiki/Inej_Ghafa?oldid=18017"
Community content is available under CC-BY-SA unless otherwise noted.