A kefta is a garment that is worn by Grisha in the Ravkan Second Army. The color of a Grisha's kefta is determined by their Grisha order and the color of the embroidery on the cuffs and hems signifies the wearer’s type within the order.

It is currently unknown whether the design of the kefta or the clothing worn underneath has changed under the leadership of the Grisha Triumvirate.

Kefta are described as long, nearly-floor-length robes that are said to somewhat resemble coats. The garment consists of several panels of fabric and is secured with hidden buttons on the wearer's front. The kefta is embroidered at its cuffs and hem and has animal fur at its collar.

Due to the Grisha's desire to emulate ordinary citizens under the Darkling's leadership, a kefta is worn over a set of peasant-like attire: a long white shirt, tied with a sash, and breeches.

Kefta are made with various materials.

Typically, black leather boots are worn by Grisha in the winter and during combat, and silk slippers are worn with the silk kefta in summer.

Because kefta are worn by Ravkan Grisha in many settings, including combat, formal gatherings, and day-to-day life, the garment is a prominent characteristic used to identify Grisha in many countries. As a result, some Grisha in nations like Kerch will wear kefta, largely for ornamental purposes and usually of much poorer quality than those made in the Little Palace, to indicate their powers.

Alina's kefta: The first of its kind, created for the Sun Summoner, this black kefta is strikingly decorated with gold embroidery to signify rays of light.

Alkemi kefta: Red embroidery on the Alkemi's purple kefta serves as a warning of their mastery of blasting powers, poisons, and all things chemical.

Durast kefta: Durasts can be distinguished by a purple kefta decorated with grey embroidery, signaling their connection to glass, steel, stone and other solid materials.

Heartrender kefta: Featuring black embroidery on the classic Corporalki-red, the Heartrenders that wear this kefta will surely make your heart skip a beat.

Inferni kefta: The fiery nature of the Inferni is signified by red embroidery, brightly marking their royal blue keftas for the world to see.

Shadow Summoner kefta: The Shadow Summoner is the only Grisha allowed to wear an all-black kefta with black embroidery, making it as unique as his powers.

Squallers kefta: Squallers wear their royal blue Etherealki kefta with pride- and silver embroidery to signify the currents of air they control.

Tailor kefta: Despite its beauty, Genya's light cream kefta is a symbol of her being a servant to the Queen of Ravka - placed in that position by General Kirigan himself. 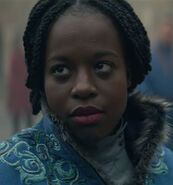