Ketterdam is the capital of Kerch. The city is a bustling hub for international trade and home to multiple criminal organizations.

Currently owned by the Dregs. Kaz Brekker bought Fifth Harbor when it was in ruins and renovated it completely with the gang's money. It was expensive at first, but they earned it all back within the first year from all the money it brought from ships docking there. It's currently one of the major sources of income for the Dregs.

Official residence of the Council of Tides, the rather mysterious group of Tidemakers who are in control of the water surrounding Ketterdam.

A wealthy neighborhood where the rich have their mansions. Councilman Hoede lives in this area.

Hotel where Kaz puts up Colm Fahey under the name Johannus Rietveld. It is fifteen stories tall, with the Ketterdam Suite on the top floor, beneath its clock tower. It has a plush dining room and space for lectures to be held. There's a multi-room spa where Kaz negotiated with Nikolai for Ravka's help.

Wylan and Jesper live there now. Inej lived there for a while until Kaz bought her her ship.

The Church of Barter resembles the hand of Ghezen. It is the place where Kuwei Yul-Bo auctioned himself with the assistance of the Dregs. It is where the final battle between Jan Van Eck and the Crows took place.

The Exchange is the heart of Ketterdam as it's where merchants buy and sell shares. It is one of the few locations not claimed by any of the gangs in the city. It is modeled after the Amsterdam Stock Exchange. The Exchange is fronted by the Beurskanal River. Carved into the rock above the eastern entrance are the words Enjent, Voorhent, Almhent. They translate to Industry, Integrity, Prosperity. It's little more than a large rectangular courtyard surrounded by warehouses and shipping offices.

Ketterdam University is where Jesper was sent to attend. It is the site of a small battle between the Crows and the Van Eck crew. The Ravkan royal family also believed that Nikolai attended the University before he revealed to them that he was Sturmhond.

The Lid is prime real estate where the best betting halls are located. It's in the northern part of the city, the section of the canal closest to the harbors, where it attracts tourists and sailors coming into port.

The Barrel is the entertainment and pleasure district of Ketterdam. It's made up of a tangle of narrow streets and minor waterways. Bracketed on each side by two major canals, East Stave and West Stave. The buildings here are different from all the other areas of Ketterdam. They are bigger, wider, and painted in every garish color. The Barrel is an oasis for criminals and gangs. Tourists who visit the Barrel often dressed as characters from the Komedie Brute to maintain anonymity or because they simply enjoy doing so.

Taverns and gambling halls comprise most of the East Stave. Gangs own and run many of these establishments. Known gambling halls include the Crow Club, which is managed by the Dregs; the Emerald Palace and the Kaelish Prince, both of which were controlled by the Dime Lions; the Cumulus Club; and Blue Paradise.

The West Stave is a red-light district that boasts numerous brothels. These brothels usually have a theme of sorts, be it the decor, the employees, or both. The Menagerie, for instance, caters to customers with predilections for exotic beauties, and the exterior is built like a cage, evoking imagery of a zoo or a circus. The prostitutes there come from foreign lands and are each called by an animal name corresponding with their country of origin. Other brothels include the Anvil, whose workers are male; the House of the Blue Iris; the House of Snow; the Sweet Shop, which was owned by Pekka Rollins; and the House of the White Rose.

This environment serves as a haven for human trafficking and enslavement, particularly for foreigners who cannot read Kerch. A person may be abducted from their home, trafficked, and then have their indenture sold; the victim then signs a contract that they cannot read because they have no other choice. Both Kerch natives and foreigners are often swindled in unfair contracts, and many of them are subjected to physical and emotional abuses by their pimps and their customers. 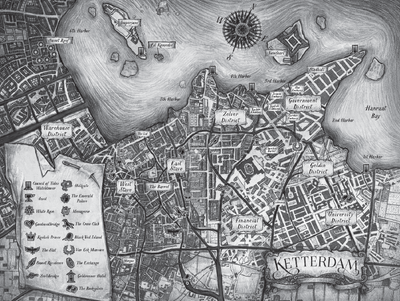 Retrieved from "https://thegrishaverse.fandom.com/wiki/Ketterdam?oldid=16007"
Community content is available under CC-BY-SA unless otherwise noted.