King of Scars is the first book in the King of Scars Duology by Leigh Bardugo, set in the Grishaverse and focused on the character Nikolai Lantsov. It was released on January 29, 2019, by Imprint.

Face your demons... or feed them.

Nikolai Lantsov has always had a gift for the impossible. No one knows what he endured in his country's bloody civil war—and he intends to keep it that way. Now, as enemies gather at his weakened borders, the young king must find a way to refill Ravka's coffers, forge new alliances, and stop a rising threat to the once-great Grisha Army.

Yet with every day a dark magic within him grows stronger, threatening to destroy all he has built. With the help of a young monk and a legendary Grisha Squaller, Nikolai will journey to the places in Ravka where the deepest magic survives to vanquish the terrible legacy inside him. He will risk everything to save his country and himself. But some secrets aren't meant to stay buried—and some wounds aren't meant to heal.[1]

Zoya Nazyalensky saves a child, Dima, from a dangerous monster. It is revealed on the way back to Os Alta that this monster is the king, Nikolai Lantsov, who has been transforming into this monster unwillingly in his sleep for the last six months and no one knows how to stop it. However, with miracles appearing across Ravka and his country suffering after the war, Nikolai is determined to rule. Things are difficult for Ravka, as their closest allies—Novyi Zem and Kerch—may soon go to war with each other, and Ravka must pick a side. Ravka's border countries, Shu Han and Fjerda, are both poised to attack the weakened nation. Determined to prevent a war, Nikolai plans a lavish festival to bring everyone together and gather whatever information he can.

When Yuri Vedenen, a follower of the Cult of the Starless Saint, asks Nikolai to name the Darkling a Saint, Nikolai decides to travel with Yuri to the Tula Valley, where the Shadow Fold once stood and where the Darkling died. He hopes that doing so will allow him to complete a purification ritual and dispel the monster within him. Zoya, Tamar Kir-Bataar, and Tolya Yul-Bataar accompany the king. To disguise the true purpose of this pilgrimage, Nikolai's retinue stops in the various towns and villages where so-called miracles have occurred. The king speaks with civilians and nobles alike, learning what Ravka needs to recover and growing his favor in the eyes of the people. In the town of Adena, Zoya is captured by khergud and Nikolai unwittingly transforms into the monster to save her.

When Nikolai, Yuri, and Zoya arrive at the Fold, a sudden sandstorm separates them from the twins. They are attacked by three Saints of old: Elizaveta, Juris, and Grigori, who then invite them to a massive palace of sand and bone. Yuri calls it a miracle, but Nikolai thinks it is a trap.

Meanwhile, Nina Zenik works with Adrik Zhabin and Leoni to smuggle Grisha out of Fjerda where many are imprisoned or killed. She struggles with grief after the death of her love Matthias Helvar, and still hears his voice reminding her that she needs to show mercy. However, Nina is bitter that she allowed Jarl Brum to live, as he is a powerful general who continues to torture Grisha. After she saves a group of refugees from a corrupt commander, Nina and her team head to the village of Gäfvalle, where women and children have gone missing. Once there, they learn that a factory is poisoning the water with an unknown substance. Nina hears the dead calling her to the factory and realizes it is a mass gravesite. Uncertain what to do, Nina finally buries Matthias's body. Shortly after, she meets a member of the convent named Hanne who is desperate for freedom. The two bond over similar interests and Nina discovers that Hanne is a Heartrender like herself. Despite Hanne's hesitation, Nina convinces her to learn to master Grisha power.

The saints inform Nikolai, Zoya, and Yuri that they have been trapped for over 400 years. Elizaveta says they must dispel the remains of the Darkling within Nikolai to free them. Doing so will turn all three of the saints into humans, but will bring life back to the Fold. Nikolai agrees to the plan. As Elizaveta trains him to summon his monster willingly, Zoya learns from Juris that she has only been using a portion of her power. He says that Grisha used to be much more powerful and in balance with nature. Juris teaches Zoya everything he knows and encourages her to control her power on her own.

Back in Os Alta, Isaak Andreyev begins his training. With Nikolai missing, Isaak is asked to impersonate the king so they can continue with the festival. Isaak, who is gifted with languages, accepts the role. However, he struggles in Nikolai's role because he is not used to the attention a king gets. Over time, Isaak meets the Shu Princess Ehri Kir-Taban. She tells him that her family wants her to marry Nikolai, but she wishes she could be a soldier instead. The two bond, and Isaak begins to act more like himself instead of Nikolai when he is alone with her. Meanwhile, Nikolai's advisors are trying to find proof that one member of the royal guard, Mayu Kir-Kaat, wants to defect from Shu Han to save her twin brother. After several private meetings, Isaak asks Ehri to meet him in the conservatory on the day of the festival; he plans to tell her the truth.

When the day of the ritual comes, Nikolai confronts his monster and dispels it. However, Elizaveta is disappointed that Nikolai triumphed over his demon, since she has planned all along to use its power to resurrect the Darkling. She reveals that she has preserved the Darkling’s body to reawaken him and allow her to escape the Fold. Zoya finds Juris nearly dead, poisoned by Elizaveta, and unites her soul with the dragon. With her newfound power, Zoya kills Elizaveta, burns the Darkling's body, and saves Nikolai. However, on their way back to the capital, Nikolai can still feel the monster within him.

In Fjerda, Nina discovers that Grisha women and girls are imprisoned inside of the factory and kept under control by a strange type of jurda parem. All of them are forced to have children if they want their next dose, but many have died in the experiments. Nina returns to the convent and is almost caught by the Wellmother, but is saved by Hanne. The next day, Nina is asked to meet with Hanne and her father. She is horrified to learn that Hanne's father is Jarl Brum and struggles to address him. When alone, she tells Hanne about the factory and asks for Hanne's help. Hanne agrees and Nina works with Leoni and Adrik on a plan to free the prisoners.

On the day that Jarl plans to tour the factory, the four disguise themselves and head to the factory. While Hanne and Adrik sedate the women and hide them in a wagon, Leoni and Nina set blast charges. However, Leoni is almost caught by Jarl who knows about the experiments. Hanne knocks him out with Grisha power, horrified. However, Hanne begs Nina to save him. She does so, but when the Wellmother tries to stop them, Nina calls the dead to her and lets them kill the Wellmother. On the way out they are stopped by guards, but the people of Gävfalle recognize many of the prisoners as friends and family. An explosion goes off, sending a wall of poison water to the town. Adrik uses his wind powers to separate it, while Leoni pulls the poison from it, saving everyone. The women are freed, but Nina tells Adrik that she is going to stay in Fjerda. Later, she meets Jarl and his wife in the Ice Court under her fake name, Mila. Both are thrilled at her progress with their daughter and ask her to stay with them. As they leave, Hanne and Nina reaffirm their plan to change Fjerda from the inside out.

Back in Ravka, Nikolai returns to the Little Palace in time to see Isaak meeting with Ehri in the conservatory. When Isaak asks her if she could love him if he was not the king, she says she could. Then, she stabs him in the heart, killing him, before stabbing herself. However, it is revealed that she missed her own heart and is still alive. Nikolai grabs one of the soldiers and reveals that she is the real princess Ehri, and the soldier, Mayu, was sent to kill the king and die to start a war between Shu, Fjerda, and Ravka. Nikolai announces that Ehri will be his wife to stop the Shu from attacking while giving him enough money to deal with the war. He then reveals that the Darkling survived by putting his soul in Yuri's body. Zoya asks to kill him, but Nikolai stops her as they need every resource available to deal with the war. The novel ends with the Darkling saying how nice it is to be home with friends. 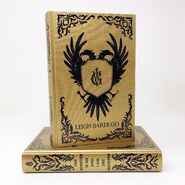 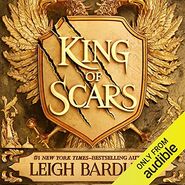 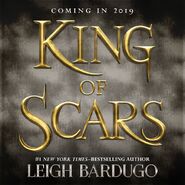 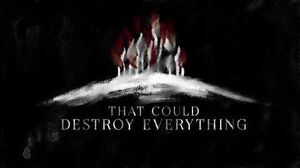