The Grishaverse
Register
Don't have an account?
Sign In
Advertisement
in: Characters, Six of Crows characters, King of Scars characters,
and 3 more
English

King of Scars
"Kuwei was hope. And he was a boy who deserved to live without a target on his back."
— Nina Zenik about Kuwei Yul-Bo, Crooked Kingdom

Kuwei and his father, the scientist Bo Yul-Bayur, lived a frightened life in Shu Han. Yul-Bayur tried to make a drug to mask his and Kuwei's Grisha powers, but instead he created the dangerous drug jurda parem. Fearing it would be used as a weapon by the Shu government, Yul-Bayur sent samples to Kerch, asking for asylum for him and Kuwei. Before they could be relocated to safety, Kuwei's father was killed in the crossfire between the Fjerdans and the Kerch when the Fjerdans ambushed them, and Kuwei was taken prisoner. Imprisoned in the treasury at the Ice Court, Kuwei was forced to recreate jurda parem for Fjerda. Kuwei had worked with his father on the drug in the lab, but stalled in his lab at the Ice Court, since he did not want the drug used against Grisha.

Nina Zenik and Matthias Helvar find Kuwei in his lab in the treasury vault at the Ice Court. Nina prepares to kill him, fearing what could happen to Grisha if Kuwei recreates parem, but Matthias points out that Kuwei is an innocent teenager. Kuwei destroys his lab, revealing his Inferni powers, then rigs an explosion to blow up the vault once the three are outside.

Drüskelle surround Matthias, Nina, and Kuwei in the courtyard of the White Island, blocking their escape. Kaz Brekker grabs Kuwei and drags them all into the hole beneath the sacred ash tree. They emerge from the river, climb out of the gorge, and onto the tank to escape the Ice Court. When they are stopped at the harbor by the Fjerdan army, Nina asks Kuwei for parem to give her the power to let them escape the harbor.

Aboard the Ferolind, Kuwei tells Nina and the others about the effects of parem addiction. When the ship reaches Ketterdam, Kuwei hides with Nina in the abandoned cages beneath the old prison tower at Hellgate while Wylan Van Eck pretends to be Kuwei for the exchange with Jan Van Eck.

Kuwei is confined to the ship-shaped tomb on Black Veil Island that the Crows use as their base. He spends most of his time with his notebooks, trying to use his father's research to develop an antidote to parem and doodling pictures of Jesper. Wylan asks Kuwei to help him finish creating a chemical weevil; Kuwei initially refuses, but Kaz threatens him into helping. Nina wants to take Kuwei to Ravka and Kuwei agrees, since he wants to train his Grisha powers and research an antidote to parem with the Ravkan Fabrikators. However, Kaz emphatically refuses and insists on sending Kuwei to the Southern Colonies. When Colm Fahey comes to Ketterdam and Black Veil, Kaz has Kuwei pretend to be Wylan's silent twin brother.

The Crows rescue Inej Ghafa from Van Eck, but the Grisha Crows encounter winged Shu soldiers, which Kuwei identifies as khergud. He reveals that the Shu government tested parem on Fabrikators and had them make Kherguud to hunt more Grisha. When Nina negotiates with Kaz to smuggle Ketterdam's Grisha safely to Ravka, Kuwei announces his intention to go, and this time Kaz agrees.

Kuwei remains hiding on Black Veil Island with Jesper and Matthias, discussing the way parem changed Nina's powers. Jesper shares his knowledge of jurda and suggests the stalks of the plant could be used in an antidote to parem. Dozens of Dime Lions ambush the tomb in an attempt to capture Kuwei, but Matthias devises a plan to escape the island using their Grisha abilities. Kuwei enhances and moves the fire from one of Wylan's incredibly hot violet bombs, creating a path across the canal to safety.

They reconvene at the Geldrenner Hotel, where they learn that the whole city is searching for them. Kuwei suggests they turn him over to Van Eck, but the Crows know Van Eck won't let the rest of them go free even if Kuwei gives himself up. Kuwei sits at the piano in the hotel suite while they wait for Kaz to explain his plan to auction Kuwei and con Jan Van Eck. When Jesper comes in and flirts with him, believing him to be Wylan, Kuwei remains silent as to not reveal himself, and Jesper kisses him. The real Wylan appears in the doorway, shocked and jealous. Kuwei reveals to Jesper that he has been able to speak good Kerch the whole time and is thrilled with his success.

Several days later at the Church of Barter, the auction of Kuwei's indenture begins. The Shu delegates at the auction hurl insults at Kuwei, and he remains silent and terrified as the bidding increases. The fake Council of Tides interrupts the auction and it devolves into chaos, moreso when Ketterdam's plague siren begins. Jesper shoots the second button of Kuwei's shirt, making it seem as though Kuwei had been shot in the heart. Kaz injects Kuwei with a poison to mimic death so the auction medik can attest to Kuwei's death. Matthias loads him into a fishing boat; on the canal, the Crows quickly exchange Kuwei for a body from the morgue. Under Zentsbridge, Zoya Nazyalensky defibrillates and revives Kuwei.

Kuwei, Nina, Inej, and Rotty row to the Van Eck house with Matthias's body and meet with the rest of the Crows. Kuwei suggests Jesper come with him to Ravka to learn to use their Grisha powers together, but Jesper and Wylan refuse. Kuwei, Colm, and Nina climb into the Crows' makeshift sickboat with Matthias's body. They pick up Zoya, Genya Safin, and Sturmhond and take Sturmhond's ship, with Ketterdam's Grisha refugees, to Ravka.

Kuwei is living in the Little Palace under the name Nhaban, which means "rising phoenix" in Shu. He works alongside David Kostyk in his experiments to create an antidote to the addictiveness of jurda parem. At one point, Kuwei set fire to the woods behind the lake at the Little Palace.

Kuwei is intelligent and wily, and regularly feigns a lack of knowledge to avoid doing things. He stalls while recreating jurda parem for the Fjerdans and pretends not to speak Kerch around the Crows. He plays dumb and imitates Wylan Van Eck while the Kerch boy is disguised as Kuwei as a way of entertaining himself and teasing Jesper Fahey. He enjoys causing mischief and mayhem.

Kuwei can be stubborn, as shown when he repeatedly stands up to Kaz Brekker and makes it clear that he wants to go to train in Ravka. Zoya Nazyalensky calls Kuwei "as pretentious as he is gifted."[1]

Kuwei is Shu and has black hair that falls on his forehead, a wide brow, and gold eyes. He looks younger than fifteen.[2] He is shorter than Wylan Van Eck.

Kuwei is a clever scientist. He recreates jurda parem and later, with the help of David Kostyk, creates an antidote to the drug, too. Kuwei is a Grisha Inferni, though untrained for the first fifteen years of his life. 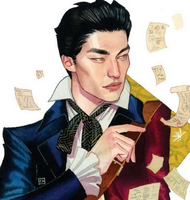 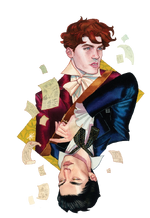 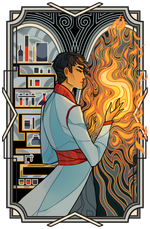 Illustration by Bon Orthwick for the Crooked Kingdom special edition