The Grishaverse
Register
Don't have an account?
Sign In
Advertisement
in: Article stubs, Characters, King of Scars characters,
and 5 more
English

Edit
This article is a stub. You can help The Grishaverse by expanding it.

Sankta Leoni of the Waters

Member of the Second Army

Leoni Hilli is an Alkemi from Novyi Zem. She is a member of the Second Army, and serves with Adrik Zhabin and Nina Zenik in Fjerda. She later becomes the representative for the Materialki in the Grisha Triumvirate.

When Leoni was a child, she accidentally ingested contaminated water. Aditi Hilli saved Leoni's life by drawing the poison out of Leoni and into herself. This resulted in Aditi's, which made Leoni decide to devote her life to helping other people.

She decided to join the Second Army where she could live more freely as a Grisha than in Novyi Zem. From then on she was taught her skills in poisons and metals.

After Nikolai became king, Leoni was stationed under Adrik in Fjerda as a member of Hringsa, an undercover organization that helps Fjerdan Grisha escape their country for Ravka or the Second Army. She helped by forging papers for transport, extracting poisons, and her skill in the Zemeni language.

Leoni, Adrik, and Nina work to help a family of Grisha escape Fjerda. Stationed in Elling, Nina works at a cannery while Leoni and Adrik pose as a farming couple from Novyi Zem. Leoni doesn't have enough time to change the documents but, they go along with the plan anyway. The mission ends in the death of some Fjerdan officers.

The citizens declare Leoni and Adrik to be new saints, where she is given the name "Sankta Leoni of the Waters".

After being declared saints in Fjerda, Adrik and Leoni return to Ravka for their safety and due to their cover being blown. They work alongside Nadia and David in building rockets for the war effort. After David's death, Leoni steps up to help Nadia build the rockets they can with their minimal titanium. Zoya appoints Leoni as the new representative of the Materialki in the Triumvirate.

Leoni is a happy and bubbly girl, described as “walking sunshine” by Nina, which contrasts with Adrik's sullen attitude. She is daring and quick on her feet, as she assists Nina in blowing up the factory run by Jarl Brum.

Leoni has dark brown skin, long black hair which she wears in twists, and brown eyes. She wears topaz and amethyst gems in her hair, which symbolize her mother and Aditi Hilli.

Adrik and Leoni grow fond of one another throughout their time on missions together. They contrast each other; with Leoni being the relentless optimism to Adrik's doom and gloom. 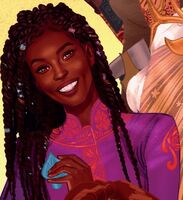 by Bon Orthwick for Illumicrate in collaboration with Leigh Bardugo

Leoni's surname comes from the woman who saved her life, Aditi Hilli. Leoni adopted Aditi's surname to honor her, in the Zemeni custom.