"The Little Palace can be a bit of a maze."

This article is about the short story. You may be looking for the character.

Little Knife is a short story by Leigh Bardugo that serves as a companion folktale to Ruin and Rising, the third book in the Shadow and Bone Trilogy. It was published first as an eBook in 2014, then in the collection Folktales from Ravka in 2015, and finally in The Language of Thorns in 2017 with new illustrations. Little Knife is a Ravkan folktale.

In this third Ravkan folk tale from Leigh Bardugo, a beautiful girl finds that what her father wants for her and what she wants for herself are two different things. It is a companion story to the third book of the Grisha Trilogy, Ruin and Rising, and the stories "The Witch of Duva" and "The Too-Clever Fox."[1]

The Duke of Velisyana grew rich by containing the river and using it to power a flour mill. He had a daughter, Yeva Luchova, who was so beautiful that her midwife, nursemaids, and others kept trying to steal her away. The Duke used Yeva's portrait on Velisyana's bags of flour and by the time Yeva was fifteen, she was confined to the palace to prevent the riots her beauty incited among the townspeople. At noon daily, she would appear from her window to listen to her suitors, until several deaths ended this practice, too.

After a three-way duel between suitors on Yeva's sixteenth birthday, the constable encouraged the Duke to choose a husband for her. The Duke orchestrated a task: whoever could clear the forest and make the biggest pile of lumber would win Yeva's hand in marriage. The Prince was expected to win, given his money and ability to hire men to cut lumber in his stead.

However, the poor Tidemaker Semyon the Ragged told the river of his desire to marry Yeva, and the river cut down the forest and built the largest pile of trees. Unwilling to let his daughter marry a Grisha, the Duke set a second task to Yeva's suitors: obtain a mirror from the Fabrikator Baba Anezka. The river carried Semyon up the Petrazoi to the witch's cave, and in thanks for its help, he named it Little Knife. The river led Baba Anezka and Semyon through a hidden path in the mountain to a shallow valley with such a perfect pool of water that it could be a mirror. Pleased, Baba Anezka handed Semyon one of her finest mirrors, telling him that the gift was for the river.

The Duke met with Semyon at the palace, then announced the final trial: retrieve the ancient magic coin buried somewhere beneath Ravka. Semyon asked the river to help him find the coin, but it was too weak to dig underground. Semyon broke the dam, and the river used its new strength to find the coin and bring it back to the surface. He told the Duke that he had found the coin and would marry Yeva on the riverbank.

As the Duke and the assembled crowd reached for the coin, the river roared and formed a giant, terrifying column of water. It told the people that it was a spirit who had been trapped by Velisyana's dam. Yeva asked the river what it wanted; it told her that it, not Semyon, had completed the Duke's tasks. The river asked Yeva to become its bride and live in freedom. Yeva jumped into the river and it carried her away to the seashore.

Velisyana's waterwheel and mill were destroyed. The Duke asked the King for relief as the townspeople left and his fortune was lost, but the Prince denied him. Semyon was driven out and died soon after, since he refused to drink water. Yeva stayed on the seashore, where she lived in happy solitude with the water as a free woman.

Image for the first cover by Anna & Elena Balbusso

Image for the second cover by Anna & Elena Balbusso 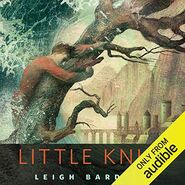