Milana is a Heartrender who works in a brothel called the Orchid.

When Dreesen brought Alexei Stepanov to Ketterdam, he needed the services of a Heartrender to get him to speak. Due to post-traumatic stress, Alexei could not describe what had saved him in the Shadow Fold from the volcra.

Kaz Brekker heard of this and in order to take away the job worth a million kruge from Pekka Rollins, he hired Milana, a brothel worker from the Orchid, for an hour. Kaz brought Milana to Dreesen but prevented him from using Milana's skills until they came to an agreement.

Accepting Kaz's terms, Dreesen brought Milana and the crows to his basement where Alexei was kept captive. Milana used her Heartrender powers to make Alexei tell them about the "miracle" he had seen, which turned out to be the Sun Summoner, Alina Starkov.

Milana is a young woman with blond curly hair and green eyes. On her left forearm, she bears the mark of the Orchid, like all brothel workers on West Stave.

Milana is a Heartrender. She demonstrates the ability to slow heartbeats in order to make someone calm down. 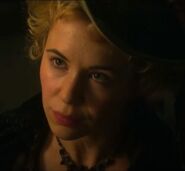