Morozova's stag is an ancient, magical, and magnificent white stag that appears only at twilight.[1] According to Baghra, they're elusive and part of the oldest science- the making of the heart of the world.[2]

In children's stories, the stag can talk and will grant wishes for its captor. Even though this is a child's story and therefore fiction, the stag is an extremely powerful creature nonetheless.[1]

The stag is first mentioned in the Istorii Sankt'ya. The animal itself is first seen after Malyen Oretsev and Alina Starkov kiss in Tsibeya while on their mission to find it. Soon after, the stag is killed by the Darkling in order to obtain the antlers and make an amplifier for Alina. The amplifier would be the most powerful one ever known.[3]

Alina's power reaches new heights and radiates an overpowered glow whenever she is near the stag. 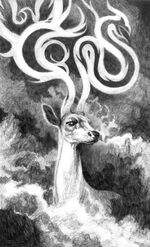 Exclusive Grisha print by John Picacio depicting the stag, the firebird, the sea whip, and the Darkling's symbol. 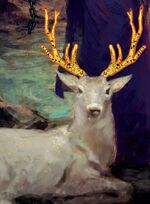 by Dan Zollinger for The Lives of Saints 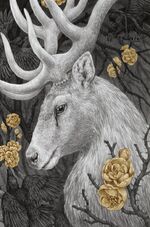 by Zoe Kellner for the collector's edition of Shadow and Bone