View source
This article is a stub. You can help The Grishaverse by expanding it.
"It was a creature wrought from shadow, its face blank and devoid of features. Its body seemed to tremble and blur, then form again: arms, legs, hands ending in the dim suggestion of claws, a broad back crested by wings that roiled and shifted as they unfurled like a black stain. It was almost like a volcra, but its shape was more human. And it did not fear the light."
— Siege and Storm, page 21

Nichevo'ya (or "the nothings") are shadow creatures created by the Darkling through the use of merzost (creation).

The Darkling demonstrates his ability to conjure the nichevo'ya when he ambushes Alina and Mal. One of the nichevo'ya bites Alina's shoulder, leaving lasting pain and a welt.

At the end of the book, the Darkling reveals his vast amount of power by turning Nikolai Lantsov into a nichevo'ya. Nikolai is only able to return to his normal self after Alina kills the Darkling, and later describes his experiences as a nichevo'ya, revealing that while he was the creature, he could not read. 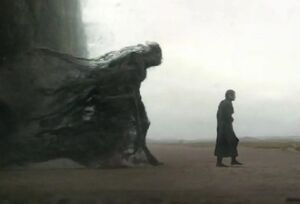 At the end of No Mourners, Kirigan is shown creating nichevo'ya out of the Shadow Fold, commanding them to follow him.

Nichevo'ya means "nothings" in Russian. The Darkling chose the name in hopes of mitigating the fear the creatures inspired in his closest allies.[1]