This article is about the character in Six of Crows Duology. For the Netflix adaptation character, see Nina Zenik (Netflix).

Rule of Wolves
"I don't like that word," Nina said, advancing."Call me Grisha, call me zowa, call me death, if you like."
— Nina Zenik, King of Scars

Nina Zenik is a Heartrender from Ravka who joined the Dregs. She worked at the House of the White Rose and used her Grisha power in her services there until Kaz Brekker asked her to join him in his quest to break into the Ice Court. She is the only known Corpsewitch.

Nina has long, curly brown hair and green eyes. She is tall and curvaceous, described as looking like a "generously carved figurehead'. She wears a red and gold robe with a black waist tie and gold trim. She also sometimes wears a blue jacket. Her beauty and her charm almost caused her to become a courtesan when she first arrived at Ketterdam, but Kaz sent Inej to offer her a place with the Dregs, instead.

In King of Scars, Nina takes on a new appearance to look Fjerdan. She describes herself as paler and, "her hair was slick, straight and nearly ice white; her eyes were narrower, the green of her irises changed to the pale blue of the northern glacier. Her cheekbones were higher, her brows lower, her mouth broader."

Nina is bold, loud, and hilarious. She has a terrible singing voice and loves to indulge in food like cake, waffles, and toffees. Despite her forwardness, Nina is shown to also be extremely charming and even forms a strong bond with Inej. However, above all her other traits, Nina is very loyal to her Ravkan roots and deems herself a Grisha soldier to the Second Army first, always putting her country's needs before hers.

As a child, Nina grew up in an orphanage. During her time at the orphanage, she was bullied. One day she found out that she could make the kids bullying her suffer using her newfound powers, and soon after went to school at the Little Palace.

Before the Ravkan Civil War, Nina attended school at the Little Palace before all of the children were evacuated to Keramzin. She was forced to cut her lessons short to start her training with the Second Army early, since they were low on soldiers.

While in the Wandering Isle, on a mission with Zoya Nazyalensky, she wandered into a camp of Fjerdan Drüskelle. She pretended to be a Kaelish girl, but the Drüskelle saw through her disguise. Matthias Helvar was part of the group that captured her.

After being captured by the Drüskelle, Nina was taken aboard a ship with other captured Grisha, one of which was a Fabrikator farmer. She was put in a cage and experienced grueling treatment and mocking at the hands of the guards.

One night, the ship experienced a massive storm. In the chaos, Nina managed to break free from her chains and escape her cage. Matthias escaped with her, and they managed to get to shore.

After the storm, Matthias and Nina stuck together. Though they argued at times, they became allies, if not close friends, until Nina turned Matthias into a Kerch merchant, claiming that he was a slaver who had captured her. The Kerch merchant brought the two of them to Ketterdam, where Matthias was sent to the prison of Hellgate.

It was later revealed that Nina had turned Matthias in to protect him. She was being watched by other Grisha and had feared they would capture him and bring him to Ravka, possibly leading to his execution. After his imprisonment, Nina stayed in Kerch instead of returning to her home country of Ravka, planning to get Matthias out of Hellgate. She began working at the House of the White Rose as a member of the Dregs.

Nina is selected to join Kaz Brekker's quest to get Bo Yul-Bayur as the only known Grisha on the mission. When we are first introduced to her, she is shown to be an 'all knowing Grisha' who made eyes with a pair of shoes before. She easily drops the act in front of Kaz and quickly makes Kaz tell her why he was there. Despite the risks, Nina takes Jurda Parem, allowing her to take out the army and drugged Grisha, heal Matthias, and tailor Wylan into looking like Kuwei. She spares the remaining Drüskelle per Matthias' request.

Nina is a Grisha, specifically a Heartrender in Six of crows. She is also gifted with languages, displaying proficiency in Shu, Kerch, Kaelish, Suli, and Fjerdan (alongside her native Ravkan), as well as a partial understanding of Zemeni—many of these skills acquired during her education in the Little Palace and honed by her experience serving in the Second Army.

Though Nina is not a Healer, she has some proficiency with healing and manages to nurse Inej back to health after she is stabbed. She also dabbles in the art of Tailoring and uses her skills throughout the Crows' journey to alter the appearance of the members if need be.

Under the effects of jurda parem, Nina's powers were elevated to new heights and she was able to kill another Heartrender from across the tundra and defeat an entire army singlehandedly. While she was "boosted", she was also able to expertly tailor Wylan to look exactly like Kuwei. Her job was so good that it didn't have "seams" and Jesper was unable to tell the two apart unless they were talking. Even Genya Safin, a master Tailor, had a hard time undoing what she had done to Wylan.

In Crooked Kingdom it is revealed that after surviving the worst effects of jurda parem, her abilities as a Heartrender have changed from manipulating living flesh to manipulating dead flesh. She controlled crushed remains from a graveyard, a collection of bones, dead bodies, and the cells of a body found in the morgue. She is known as a Corpsewitch.

Nina and Matthias first met when she was captured by a Fjerdan army, which Matthias was a part of. When Nina was captured, she was put on a ship. The ship, however, sank with Matthias and Nina to be the only ones who survived. The two of them were wary of each other at first but grew to be something close to allies while hiking. In order to protect Matthias, Nina turns him in under the guise that he was a slaver by telling a Kerch merchant. The Kerch merchant got the police to get Matthias into Hellgate. Nina tried to help him for a year before Kaz finally agreed to get him out. Nina is overjoyed to see him again whereas he tries to strangle her and desperately wants to kill her. The two act as if they hate each other but quickly become close again, especially since they have the same goal: kill Yul-Bayur. However, they decide not to go through with it as it turns out he was already dead and his son, Kuwei Yul-Bo, was in his place, and he was only a teenager. Matthias saves her from Jarl Brum by pretending he is still loyal to him, and the two embrace as Matthias promises to protect her using the Druskëlle oath. He then looks worriedly after her as she goes through the side effects of taking jurda parem, and continues to be worried for her throughout Crooked Kingdom. Nina grows tired of his attitude and the two bicker quite a bit before kissing passionately for the first time. They make plans for the future, but Matthias is shot and killed by a fellow Druskëlle.

Hanne Brum lives in the convent of Gafvalle in the book King of Scars, where Nina stays along with two other members of her covert mission in Fjerda undercover as Mila. Nina first meets Hanne when Hanne was dressed as a soldier with the other Spring Maidens in a field riding horses, wanting the freedom of being a man but knowing it is against all the rules set forth. After Nina, Leoni, and Adrik helped save a girl from her injuries from a spooked horse, Nina realizes the spark in Hanne -- what makes her different from the others. Nina later comes to find Hanne is Grisha and begins to teach her how to use her powers under the guise that her sister was Grisha. She first thought Hanne was a Heartrender, but it appeared to be that Hanne was a Healer. The two become very close, eventually working together at the end of King of Scars to begin to bring down Jarl Brum. Nina also appears to show romantic feelings for Hanne.

Inej and Nina first meet in the Dregs and they form a very close relationship. When Inej is stabbed by Oomen, Nina heals her and they become each other's emotional support in the group. They form a lasting bond and both care about each other very much. 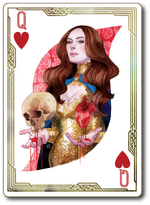 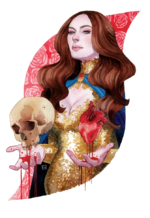 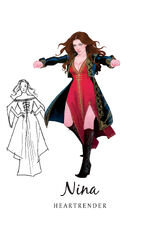 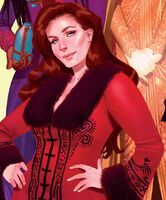 Retrieved from "https://thegrishaverse.fandom.com/wiki/Nina_Zenik?oldid=18021"
Community content is available under CC-BY-SA unless otherwise noted.