View source
This article is about the character in Shadow and Bone (TV series). For the book character, see Nina Zenik.

""No, it's not natural for someone to be as stupid as he is tall and yet, there you stand.""
— Nina Zenik to Matthias Helvar

Nina Zenik is a Heartrender for the Second Army and a spy for The Darkling.

Nina was tasked with finding those aiding in the escape of rogue Grisha from Ravka. Her last report before being captured by the Drüskelle was that she was crossing the Fold with the Conductor and three Grisha defectors from Ketterdam.

Nina is held up at a boarding house in Novokribirsk, where she works with the Conductor to smuggle out deserters from the Little Palace. As she awaits the Conductor's arrival, Nina is attacked by the Drüskelle — Fjerdan soldiers. She attempts to fend off her attackers but is outnumbered and subdued.

Nina is shackled and placed in the lower deck of a ship with other Grisha prisoners bound for the Ice Court, where they will face trial. Nina questions just how many Grisha are ever found innocent by Fjerdan law, but Matthias doesn't reply. She then notices the bola hanging from his coat and realizes that he assisted in her capture. Nina was under the impression that the Drüskelle respected their women, to which Matthias replies that Grisha are not women.[1]

While his comrades are distracted, Matthias brings Nina food to eat. When she accuses him of trying to poison her, he takes a bite to ease her suspicions. Maybe not poison, Nina admits, but she suspects that Matthias at least wants something in return. He admits that he needed answers, asking if her parents are also Grisha and if she was born Grisha or became one by choice. It becomes clear to Nina that Matthias and the Drüskelle know very little in the ways of the Grisha. All he knows for certain is that they're enemies and that Heartrenders such as herself use magic to stop hearts. Nina explains that Heartrenders can also soothe tempers and calm those in pain. Matthias then asks Nina about the Darkling, but she would rather starve than be a trader. Still, Matthias offers her a bite of food. Nina reluctantly takes a bite only to spit it in Matthias's face.[2]

The ship headed for Fjerda with Grisha captives is shipwrecked. Nina manages to escape her shackles and find refuge on a sheet of deck wood along with an unconscious Matthias. She uses her abilities to save his life, which he is less than grateful for. He pushes away and falls into the water, accusing Nina of being a trickster. He questions why she saved him. Admittedly, they need each other: Matthias' strength to swim to shore and Nina's Grisha powers to keep the two of them warm.

Nina and Matthias wash up on shore and search for shelter, though they are unsure exactly where they have landed. They arrive at a lodge in a deserted whaling camp, where Nina proceeds to undress from her cold and wet clothes to keep warm. She offers to help keep him warm but only if he undresses as well. Matthias relents and snuggles up behind Nina, who details how Matthias is cold and clammy like a squid. She places her hand over his chest and warms his body before resting. "You're welcome, you big idiot," she says in Matthias' native tongue.

Matthias awakens next to Nina and jumps to his feet, claiming that he can't wait to be back in his own bed, but Nina would beg to differ. He questions why she speaks in such a lewd manner, especially in comparison to Fjerdan women who are typically more modest and pious. Fjerda women are caretakers and the men are protectors, whereas in Ravka, the men and women fight together. Matthias claims that it's not natural to fight as so, to which Nina retorts "it's not natural for someone to be as stupid as he is tall and yet, oh, there you stand." She proceeds to challenge Matthias to a fight, which earns a bit of laughter, much to Nina's surprise.

Nina and Matthias travel on foot through the cold. Matthias insists that they're not lost and that Drüskelle are trained to overcome any situation. She tells him to relax, but Matthias pulls away. She questions why that is, suggesting that he's afraid that he might begin to like her. He's scared that if he likes a Grisha that he might start to think of them as human. Matthias then admits that he does in fact like Nina, despite the fact that she's horrible, loud, and lewd. Jarl Brum always warned them how charming witches could be. Matthias wonders if this could be yet another one of Nina's tricks. Nina amusingly refers to herself as the wicked Grisha seductress who beguiles innocent men with her Grisha wiles. She then begins to tickle Matthias, a smile forming on his face followed by laughter. Suddenly, the ice gives away and Nina nearly falls into a seemingly bottomless pit. However, Matthias saves her, though not without at least considering letting her go. The two then exchange names rather than referring to one another as "witch" and "Drüskelle."[3]

Nina and Matthias arrive in the town of Arkesk. Matthias intends to go north in the night, but Nina doesn't wish to separate. She proposes they find somewhere where they can be together, somewhere where they're not simply labeled as "Grisha" and "Drüskelle." Should he leave, he could never go back to Fjerda, as he would be court-martialed as a deserter. And Nina would be branded a traitor to all Grisha. Matthias has only known two countries his entire life: his and Nina's. He asks what the others are like. She mentions Kerch and the Wandering Isle. Just as they're about to kiss, Matthias' stomachs growls.

Nina and Matthias go downstairs for waffles, during which Nina overhears a Kerch man saying that he hunts slavers. As long as a captive will testify in court, there's big money in capturing slavers. Suddenly, Matthias' falls unconscious and Fedyor emerges to save Nina, but she in fact doesn't require saving, revealing that she's with Matthias. She claims that he's changed, but Fedyor isn't convinced. He gives Nina one last chance to salvage her reputation by bringing Matthias back to the Little Palace and handing him over to the General. Instead, Nina accuses Matthias of being a slaver and the Kerch man asks if she's willing to testify in court, which she is. She pleads with the man to take her with him to Ketterdam. This leads to a dispute between the Grisha and the bar patrons. The bounty hunter reminds Fedyor that they're already at war with Fjerda and that it wouldn't be a good idea to start a war with the Kerch as well. Fedyor relents, and Nina leaves with Matthias and the Kerch bounty hunter.

Nina visits Matthias, who has been placed in a cell below the deck of the Kerch bounty hunter's ship. She brings him food and water, but Matthias feels as if he's been betrayed and grabs on to her through the cell bars. She forces him to release her and apologizes for accusing him of being a slaver. She explains that she acted to save his life. The Grisha would've simply killed him. It was either falling on the mercy of Kerch law or certain death. By accusing Matthias of slavery, she knew they'd simply arrest him, and she intends to drop the charges when the case goes to court. Another prisoner laughs and informs Nina that the trial won't be for at least a year or two. In the meantime, he'll be sent to Hellgate. Nina begs Matthias to trust her, but she broke his trust, as there's nothing she can do to fix this.

Nina heads back up top, where she overhears the Crows discussing how they're in need of a Heartrender who is desperate for work and with loyalties only to them. Nina then overhears another man say that the Sun Saint is dead and asks if it's true. Kaz replies that he doesn't know if she's dead, but he does know that she's a Saint.[4]

Nina is loud and extremely lewd, especially in comparison to Fjerdan woman, according to Matthias. The manner in which she speaks to him is often sexual in nature. More notably, Nina is loyal, both to her cause and to those she cares about. Despite Matthias being Drüskelle, the two began to overcome their differences, and she saved him from being executed by the Darkling by accusing him of being a slaver.

Nina has brown hair and pale blue eyes,with a face full of freckles.

Nina is an accomplished Heartrender and was nearly able to defeat 4 Drüskelle after being ambushed by them, and was only beaten after a fifth unseen Drüskelle managed to bind her hands, cutting off her powers.

Nina is able to convince an innkeeper in delaying paying off her tab with her powers.

Nina is a skilled spy and disguises herself as Kaelish when on missions outside of Ravka.

Nina can speak 6 languages and is proficient enough in Fjerdan to pass off as a native speaker.

Nina and Matthias started out as enemies, with him and the Drüskelle capturing her in a boarding house in Novokribirsk and placing her on a ship headed for Fjerda to stand trial. However, as the ship sank, the two were forced to put aside their differences in order to survive. In that time of traveling together, they grew close and the antagonistic nature of their relationship subsided. Eventually, Matthias even confesses to Nina that he does like her, but he feels like he shouldn't. They act playful and teasing around each other on several occasions, and once almost kissed. Nina claims that he's changed, to Fedyor, who had noted that her heart was pounding and had asked if it was for Matthias. 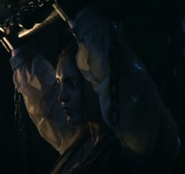 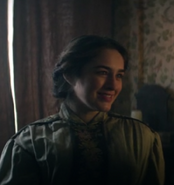 Danielle Galligan uses her native Irish accent when Nina acts undercover as someone from the Wandering Isle.[5]

Español
Community content is available under CC-BY-SA unless otherwise noted.