"The trap is loneliness, and none of us escapes it. Not even me."
— Sofiya, The Too-Clever Fox

Sofiya was the half sister of Lev Jurek, an infamous Ravkan hunter.

After hunting in Balakirev, Jurek and Sofiya left for Polvost. While her brother had friends and villagers over for large dinners, Sofiya would read by the fire or sew additions to her cloak. Every few days, she pulled a sled carrying blankets and food to and from the old widows' home across the valley. She would stop in a clearing and sit down to cry, and animals would approach her. She would trap them by preying on their loneliness—telling jokes to the bear Ivan Gostov and playing music for the gray wolf. Then, she would kill them silently with a knife and bring their bodies back to town, hidden under the blankets of her sled.

Koja the fox spoke with her several times, first by telling her wild stories and making her laugh, then encouraging her to talk about her brother's hunting prowess. She convinced the fox that Jurek kept her prisoner and forbade her to marry. On their third meeting, Sofiya told Koja that her brother wore a magic charm he received from a witch; Koja asked her to steal it from him to free them all from Jurek's trap. Three days later, Koja gave her dropwort leaves to put Jurek to sleep so she could steal his charm.

The next day, Sofiya showed Koja the charm and they celebrated with wine and food. Sofiya had put the dropwort in Koja's wine, so he fell asleep in her lap. She bound his paws and began to cut off his coat with her knife. She revealed to the fox that she, not her brother, was the silent hunter, and she planned to use Koja's coat as a lining. When Koja cried out, Lula the nightingale responded and pecked at Sofiya's eyes.

Two days later, a blind Sofiya stumbled from the woods and returned to her brother. When Jurek's new wife was troubled by Sofiya's mad ramblings about animals, he sent her to live at the old widows' home. Thanks to the food she had brought them, they took her in, but once their gratitude was exhausted, they grew tired of the care Sofiya required and left her to sit by the fire in her cloak.

Sofiya was cunning, using the attention her brother gathered to mask her journeys into the woods, but she disliked that her brother was credited for the stories of her kills. She was not friendly, and the relationships she built were purely utilitarian. Although she brought food to the old widows, she did not give them company, kind words, or friendship, because she did not think she would need such care returned. She was lonely; however, she used animals' loneliness to lure them into her traps.

Sofiya was pretty, with pale skin, even teeth, and dainty feet. She was notorious for the gruesome cloak she wore, a patchwork of animal skins that trailed behind her on the ground. It featured the head of the gray wolf for the hood, two golden lynxes for the sleeves, and the tails of seven fox kits for the collar. 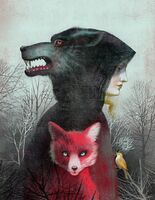 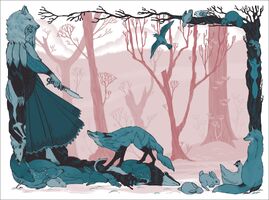 Art by Sara Kipin from The Language of Thorns
Community content is available under CC-BY-SA unless otherwise noted.
Advertisement