The Grishaverse
Register
Don't have an account?
Sign In
Advertisement
in: Characters, Shadow and Bone characters, Six of Crows characters,
and 5 more
English

Edit
This article is about the character in Shadow and Bone Trilogy. For the Netflix adaptation character, see Tamar Kir-Bataar (Netflix).

Tamar Kir-Bataar is the twin sister of Tolya Yul-Bataar and a Heartrender. She is a former member of Sturmhond's crew. Later, Tamar becomes a member of the Soldat Sol, a militia dedicated to protecting the Apparat and the Sun Summoner. After the Ravkan civil war, Tamar becomes the captain of Nikolai Lantsov's intelligence network.

Her mother was a Grisha stationed near the Shu Han border and her father was a Shu Han mercenary. The twins wanted to join the Priestguard as children, but since they would not allow a woman in their order, Tolya also did not join.[1] After their mother's death, the twins left for Novyi Zem with their father so they would not get drafted into the Second Army.

Tamar is stationed at a tavern in Kerch's Ravkan embassy. She spots Nina Zenik and Matthias Helvar, but does not recognize Nina, who is disguised. Tamar tells them to come and drops their pulses when they stall for time. In an attempt to evade capture, Matthias uses a duskbomb to obscure her sight and Nina sends bone shards crashing into the tavern windows.[2]

On the way out of the embassy, Nina finds Tamar and warns her not to be taken by any khergud. Tamar tells her that nobody will take her alive, showing Nina a pill full of poison that kills instantly. Since she has an extra, she gives the pill to Nina.[3]

When Nikolai escaped his chambers at Duke Radimov's estate in Ivets, Tamar and Tolya accompanied Zoya Nazyalensky to find him.

Upon their return to Os Alta, the twins and the Grisha Triumvirate met in the Little Palace war room to discuss the Kerch Merchant Council's knowledge of Ravka's izmars'ya. Tamar suggested that Ravka ally with the Kerch, while Tolya advocated for an alliance with the Zemeni instead. Nikolai proposed a party attended by foreign dignitaries; Tamar agreed to collect intelligence on the visitors to Os Alta during the event. She also informed Nikolai that Dunyasha Lazareva was killed in Ketterdam.

A week later, Tamar and Nadia Zhabin told Zoya about recent khergud attacks on Ravkan Grisha. To Zoya, she defended Nikolai's decision to send Nina to Fjerda. Tamar and Zoya planned to investigate shipments of ruthenium in order to discern where the khergud were being created, which Tamar's intelligence network had not yet found. Later that day, she notified Nikolai of a conflict between the Priestguard and the Cult of the Starless Saint outside the city. Tamar advised him not to leave the city walls, but he rode out to speak to Yuri Vedenen; she and Zoya accompanied him. She lent her horse to the monk when they returned to the city.

At night, Tamar knocked on Zoya's door and told her that Nikolai escaped his chains. With Tolya, they rode toward Balakirev. The twins ran up the stairs of the town hall, but he moved to the bell tower instead. An injured Zoya called for them and they reached the bell tower just in time. Tamar drew the demon's attention with her throwing axes, allowing Tolya to use his Heartrender powers.

Tamar disagreed with Genya Safin and Tolya's suggestion to cancel the party in light of Nikolai's worsening condition. When Yuri brought up the obisbaya, Tamar identified it as the Ritual of the Burning Thorn and the origin of the Priestguard. Tamar stole books about the thorn wood from the catacombs of the Priestguard. She was part of the retinue for the king's tour of miracles sites around the country. Tamar was late to their departure, since Nadia did not want her to leave. At one stop, she found a servant digging through Nikolai's belongings, so she guarded his door after this.

Outside a cathedral in Adena, their company was attacked by khergud. Tamar and Tolya prepared to protect Nikolai, but the khergud threw a heavy metal net over the twins, restraining them until Nikolai killed the soldier. After freeing themselves, they arranged the skirmish site to seem like part of the cathedral's overhang collapsed. That night, Tamar returned to the cathedral, retrieved the bodies of the khergud they had stashed in the rosebushes, and had them transported to Os Alta to be studied. In their quarters, Tamar and her brother played chess while Nikolai explained his demon to Yuri.

In Kribirsk, Tamar stayed in a boarding house with Nikolai and Zoya. She received intelligence that one of the Tavgharad wanted to defect. Tamar investigated the drydocks before their company set out into the Shadow Fold. When they encountered pilgrims and zealots of the Starless Saint, Tamar and Tolya disembarked the sandskiff to investigate the giant black stone disk. Nikolai and Zoya vanished, and although the twins searched, they could not find them and had to return to Os Alta.

Tamar led Isaak Andreyev to the war room, where the Triumvirate explained their plan to have Isaak impersonate Nikolai for the party. Despite the others' discouragement and fear that the plan would not work, Tamar insisted that the event must continue. Tamar and Tolya smuggled the tailored Isaak to Count Kirigin's estate, then rode with him back to the palace and coached him on how to behave kingly. After the first dinner, the twins led Isaak back to the royal quarters, but Tamar determined someone had rigged the door with arsine gas and shepherded Isaak to safety.

On the fourth day of the party, Tamar arranged for Isaak to spend time with Ehri Kir-Taban to learn about the princess's guards. During the picnic, Birgitta Schenck fell into the lake and was rescued by Isaak; Tamar and Tolya revived her with their powers. Again, the twins, David Kostyk, and Genya met with Isaak to debrief and plan their next steps. Tamar searched the rooms of the Shu entourage, but did not find anything useful.

Tamar discerned that Mayu Kir-Kaat planned to defect from the Tavgharad, due to her brother being stationed in Koba. She accompanied Isaak to Kirigin's estate and found the planned disaster with the izmars'ya missiles hilarious. The next day, the council discussed Nikolai's continued absence and Tamar suggested that the Apparat was likely involved.

Isaak leads Ehri and the Shu delegation to the training rooms, where Tamar invited Mayu to spar with her. While Isaak and Ehri sparred as a distraction, Tamar attempted to talk to Mayu about her brother. Overestimating her skill, Tamar accidentally hurt the guard. Mayu suggested reparations in the form of a private dinner; Tamar pretended to disapprove, though she valued the chance to chase further information.

That night, Tamar informed Isaak that Fjerda planned to declare war on Ravka and dismiss Nikolai as the true Lantsov heir. The twins re-hashed their argument about the merits of allying with the Kerch versus the Zemeni, again without reaching a conclusion. During Isaak's picnic with Ehri the next day, Tamar spoke with the Tavgharad guards stationed in the woods.

After Mayu (pretending to be Ehri) stabbed herself at the final ball, Tamar used her Heartrender powers to restore her pulse and stabilize her. She had the Shu girl taken to the Healers to be fully revived. When the festivities ended, Nikolai brought Ehri (pretending to be Mayu) to meet with the twins and the Triumvirate. Tamar and Tolya escorted Ehri to her chambers, then returned to discuss their plans for Ravka's future. Upon seeing the Darkling returned in Yuri's body, Tamar drew her axes and moved to protect Genya from him.

Tamar is fearless and occasionally reckless. She is described to have a sly "Heartrender's grin." She is fiercely loyal to both Alina and Nikolai. Tamar is not loyal to Ravka, only to Alina and Nikolai, who she serves proudly.[4]

Like her brother, Tolya, Tamar is religious. She believes that Grisha power is a divine gift, partially contributing to her faith in Alina. She does not believe in coincidence, instead believing in faith and fate.[5]

Tamar has close-cropped dark hair, golden eyes, and bronze skin. Because of her Shu heritage, she has monolids. Both she and her brother have tattoos on their arms dedicated to the Sun Saint. She wears her axes at her hips and a large number of other weapons as well. She has an amplifier for her Grisha powers; a shark's tooth she wears around her neck.

Despite the fact that Tamar and her brother are Grisha, they refuse to wear kefta, instead opting for the olive uniforms worn by the First Army. During their time as members of Alina's personal guard, the twins wear peasant roughspun and golden sunburst pins.

Though she is a powerful Heartrender, Tamar does not solely rely on her powers in combat, usually fighting with many weapons. She is especially proficient in fighting with axes.

Tamar carries twin axes at her hips.[6] Her amplifier is a shark's tooth, which she wears on a necklace.[7]

Tamar and Nadia are shown to have a growing affection for each other. By the time Alina and the remainder of the Second Army go into hiding in the Spinning Wheel, Tamar and Nadia are in love and officially a couple. They are married sometime between Ruin and Rising and King of Scars'.

Tolya and Tamar are twins and have much in common. They have an unbreakable bond and work well together. They often tease one another and compete with their abilities.

Tamar knew Nikolai first under the alias Sturmhond, since she was a member of his ship's crew. They worked well together, and they had mutual respect and friendship with one another. Although she does not particularly like the idea of the Ravkan monarchy, at the end of Ruin and Rising she becomes Nikolai's bodyguard and head of his intelligence network, working with the First Army.

Tamar is a true and loyal friend to Alina. She takes an immediate liking to her aboard Sturmhond’s ship in Siege and Storm, and the two remain close friends, bonding beyond Tamar’s oath of loyalty to Alina. She trains the Soldat Sol, Alina’s personal soldiers, in the White Cathedral. She joins the group in helping Alina find the Firebird, and is one of the only people to know that Alina survived the battle on the Fold. 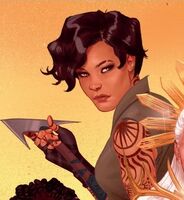 by Bon Orthwick for Illumicrate in collaboration with Leigh Bardugo