"The Little Palace can be a bit of a maze."

The Language of Thorns: Midnight Tales and Dangerous Magic is a collection of six stories that act as folk tales for the Grisha universe by Leigh Bardugo. It contains three short stories previously published as ebooks, along with three brand-new tales. Each of them are illustrated with art by Sara Kipin that changes with each turn of the page, culminating in six full-spread illustrations that summarize each tale.

Travel to a world of dark bargains struck by moonlight, of haunted towns and hungry woods, of talking beasts and gingerbread golems, where a young mermaid's voice can summon deadly storms and where a river might do a lovestruck boy's bidding but only for a terrible price.

Chapter heading for Ayama and the Thorn Wood 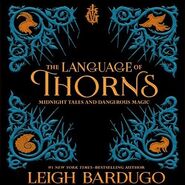