The Too-Clever Fox is a companion folk tale to Siege and Storm, the second novel in the Shadow and Bone Trilogy by Leigh Bardugo. It was published first as an eBook in 2013, then in the collection Folktales from Ravka in 2015, and finally in The Language of Thorns in 2017 with new illustrations. The Too-Clever Fox is a Ravkan folktale.

In Ravka, just because you avoid one trap, it doesn't mean you'll escape the next. This story is a companion folk tale to Leigh Bardugo's novel, Siege and Storm, the second book in the Grisha Trilogy, out now from Henry Holt and Co.[1]

In the woods near Polvost, Ravka, a litter of foxes was born. Koja was the runt of the litter, a small, ugly fox who was nearly eaten by his mother. By appealing to her vanity, he convinced her to let him live—the first time Koja escaped a trap using his clever words. Outside his den, Koja was cornered by a pack of hounds, and claimed to be a wish-granting fox in order to push the hounds into fighting each other so that he could escape.

When Koja stepped into a farmer's trap, he called out to the bloodthirsty black bear Ivan Gostov. The bear picked up Koja's trap with the intention of eating him, but Koja spoke to the fleas on the bear. Koja would allow the fleas to live on him for one year, if they all bit Ivan Gostov. In his pain, the black bear dropped Koja's trap, allowing the fox to run to safety. With the fleas, Koja became uglier and smelled so terrible that only the nightingale Lula would visit him. After a year with the fleas, Koja stole kvas and a chicken from the farmer and brought them to Ivan Gostov. He convinced the bear that Koja would be better company than a meal, and the fox and bear became friends.

One winter, Ivan Gostov disappeared. Koja sent Lula to investigate the town and she discovered that the legendary hunter Lev Jurek had arrived in Polvost. Jurek was known for traveling from village to village, emptying the woods of fauna and never making a sound nor leaving tracks. Concerned for the lives of the forest animals, Koja and Lula went into town and observed Jurek and his sister, Sofiya, in their daily routines. Jurek held parties and boasted of his kills; Sofiya sat by the fire and sewed her patchwork cloak of animal furs.

Koja followed Sofiya on her regular journey across the valley to the old widows' home. At a clearing, the girl stopped and began to cry, and Koja told her a funny story to cheer her up. On Sofiya's next trip to bring food to the widows, Koja told her stories of his cleverness and Sofiya gave him cheese. The next day, Sofiya told Koja about her brother. Koja needed to know how Jurek could hunt so silently in the forest, and Sofiya told him that her brother carried a charm from a witch.

Koja gathered dropwort leaves to ensure Jurek would remain asleep while Sofiya stole his magic charm. He encouraged the other animals not to leave, telling them that the hunter would soon be gone from their woods. He gave Sofiya the dropwort and the next day, she returned with the charm. Koja and Sofiya shared wine and food, and the fox fell asleep in her lap. Sofiya began to cut off Koja's coat with her knife, revealing that she, not her brother, was the silent hunter. She lured the animals into her trap, offering companionship or whatever the animals sought. Dying, Koja cried out; Lula heard his call and pecked out Sofiya's eyes, blinding her.

After two days, a blind Sofiya returned to her brother, but she could no longer lure animals into her traps. Jurek, no longer living in fear of his sister, became a woodcutter and married. His wife was discomfited by his sister, so Jurek sent Sofiya to live at the old widows' house. Koja and Lula made a quiet life together, and Koja learned to be more careful when dealing with humans and traps.

Image for the cover by Anna & Elena Balbusso 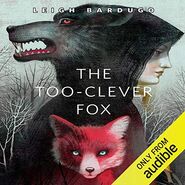