The Witch of Duva is a companion folk tale to Shadow and Bone, the first novel in the Shadow and Bone Trilogy by Leigh Bardugo. It is a Ravkan folktale.

There was a time when the woods near Duva ate girls…or so the story goes. But it's just possible that the danger may be a little bit closer to home. This story is a companion folk tale to Leigh Bardugo's debut novel, Shadow and Bone.[1]

Nadya's town is being tormented by the mysterious disappearances of local women. The incidents arise after reported missing girls from nearby towns. This is followed closely by a harsh winter that forces Nadya's father to sell his modes of transportation in order to support his family.

Soon after the third local disappearance, Nadya begins to suspect Karina, a local baker, of being a witch and luring the girls into the woods. Karina marries Nadya's father, Maxim, and begins to torment her. She starves Nadya, locks her in her room, steals the food she finds, and prevents her father from showing her affection. Nadya runs away and lives with a kind witch named Magda in the woods. The witch turns her into a raven temporarily, at her request, so that she might spy upon Karina.

Nadya flies home the following spring and is sent with a gingerbread creation made in her image. The ginger girl approaches her home and meets with Maxim and Karina. Karina responds sadly, stroking the girl's cheek and excuses herself to visit a friend. Maxim hugs his daughter and begins to kiss her, apologizing desperately all the while. He begins to eat the ginger girl, whom he believes is his daughter, and gorges himself on her flesh. He is found dead in the morning and is convicted for the deaths of the other girls. Nadya realizes that Karina had been sacrificing herself to hold Maxim's attention, allowing Nadya to escape.

Her father is buried without a religious ceremony, and Nadya becomes a powerful witch under the tutelage of Magda, the kind witch in the woods.

Image for the cover by Anna & Elena Balbusso 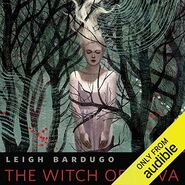