Sankta Ursula of the Waves[1]

The Lives of Saints

Ulla is a half-sildroher songcaster and the half-sister of The Darkling via their late mother, Baghra. She is also known as Sankta Ursula of the Waves.

Ulla spent her childhood feeling like an outcast, having heard rumors of her being part human. While she attended school she was assigned in class to a girl named Signy to be her music partner. The two soon became close friends, and are able to summon powerful storms together when they sing.

Years later at a celebration of the king's youngest son, Roffe, both girls gain the prince's attention by creating a magnificent garden for the royal family through one of their songs, composed by Ulla. Roffe is impressed by the display of power and the three form a friendship, in which Ulla discovers that while the prince is lazy, he is dangerously ambitious. Signy falls in love with the prince, despite Ulla's reminders that he is a prince while they are commoners.

Every summer the sildroher princes take a three month long trip to the mainland where they mingle among the human nobility. The year the sildroher king declares his abdication of the throne, Roffe invites Ulla and Signy to join him and his brothers on their trip to the human world. When they return the brothers will present gifts to their father, and the prince with the most impressive gift, regardless of birth order, will become the next king. While Signy hopes that Roffe may be developing feelings for her, Ulla knows that Roffe intends for the two girls to create a gift impressive enough to make him king.

Ulla's parents disapprove of their daughter going to the land, but Ulla joins Signy and Roffe regardless. The process of turning into a human involves violently cutting their tail in half while singing a spell that converts their bodies into human forms. The knives used in the transformation then have to be preserved and untouched by the mortal or else the sildroher would be unable to transfigure back to their original forms. After this is done the sildroher make their way to their lodgings with the royal family. The company spends the next three months mingling amongst the humans, attending dances, having affairs, and enjoying the vices of the mortal world.

While on land Ulla meets the apprentice to the king's seer who shows her a magical mirror in which a person's reflection can talk back to the viewer. As the trip progresses, Roffe becomes more eager for the two girls to create a gift that would secure his place on the throne. In an argument, Ulla says that the only thing Roffe can give his father to win the title is fire that can burn underwater. Ulla believes this is impossible, but Roffe is adamant that it needs to happen. Ulla begrudgingly returns to the apprentice to ask him how to create such a fire. The apprentice replies with a grim response, the only way to sustain the fire is to take the breath, or life, of a human. The apprentice also reveals to Ulla that they are brother and sister, their mother being a Grisha who was impregnated by Ulla's father, a sildroher. The apprentice invites Ulla to leave with him to return to their mother, saying that the sildroher will never show Ulla the love and devotion she craves. Both sets of information devastate Ulla.

Now knowing the rumors surrounding her birth are true, Ulla asks Signy if she would still love her even if she were part witch, to which Signy assures she would always love her. Ulla is determined not to create the fire, but Roffe bargains that if Ulla creates the fire he will marry Signy and make her his queen. As the weeks go by Roffe pretends to be falling in love with Signy, causing her hope to rise. Unable to break her best friend's heart, Ulla agrees to go through with the murderous ritual. On the last night of their trip, Roffe drugs a ten year old he claims to be a murderer and the two girls begin singing their spell. The boy awakens right as Roffe cuts out the child's lungs, then setting them on fire to create the eternal flame. In the process, Ulla catches fire and is left in critical conditions.

When the ritual is complete, Roffe reveals that the sacrificed boy wasn't a murderer at all, but an innocent child. He also reveals that he used Ulla's knife to cut out the boy's lungs, meaning that Ulla would be unable to transform back into a sildroher. Ulla realizes that the only person who had access to the trunk Ulla kept her knife in was Signy, who admitted to giving the knife to Roffe who told her he would only use it as leverage in case Ulla wanted to back out of the ritual. Mortally injured and bleeding out on the floor, Ulla begs Signy to summon the other sildroher to heal her, but Signy instead chooses to leave with Roffe, abandoning Ulla to die.

Angry at Signy's betrayal, Ulla wills herself to find the apprentice's mirror. She holds a second mirror up to her reflection creating an unending chain of reflections and has all of them sing a healing spell to restore her. Ulla then changed the song to summon a storm that brought the ocean up to the palace, destroying the town, much of northern Fjerda, the sildroher's kingdom, and returning her to the sea. After the storms passed, Roffe and Signy became king and queen, relocated their kingdom, and had seven daughters, but the sildrohers stopped visiting the shore and using their singing magic ultimately forgetting their history. Ulla lives in the caves and pools of the northern islands awaiting Signy's daughters to come to her, like so many other ambitious people, to strike bargains for the things they desire in return for the things they hold dear.

Sankta Ursula of the Waves[]

In the northern reaches of Fjerda, a young princess called Ursula worshipped and prayed to the saints. The people of Fjerda who worshipped Djel saw this as unlawful and demanded she give up her faith.

Ursula would not. The people became convinced she was possessed by a demon, her family took her to the shore to exorcise the evil they believed dwelled inside her. They did so by holding her beneath the water and beating the surface with ash boughs, but no matter how many times and how long they dunked her under the water, she didn't drown.

The Fjerdans took this as proof that she was indeed possessed, and was no longer human but half-fish. They decided to cut the girl open to see if she was indeed no longer human. When the priest was about to slit her throat, a cry rang from the city's watchtower. A giant wave, big enough to block the sunj was rushing toward the city. The people turned and tried to run but the wave consumed the city.

Just as the priest's blade hand had sought to slit Ursula's throat, the shore split from Fjerda's northern coast and created the islands known as Kenst Hjerte, the broken heart. Ursula, who had clung to her faith, survived and lived to an old age in a rock cave on one of the islands, eating nothing but the mussels and oysters she collected from the tide pools, and drinking salt water.

A chapel was built into the rock on her island, where sailors' wives still come to pray to Ursula, patron saint of those lost at sea. They leave offerings of bread baked into the shape of fish, and wish for their lovers' return. When they leave, some find bones or sea pearls in their pockets, though no one is sure if these are ill or good omens.

Ulla is described as a sildroher with gray-tinged skin, black hair, and dark eyes. This changes after her arrival to Söndermane when she is away from the water, her skin is no longer gray but appears a burnished bronze accented by her black hair.

Ulla is a talented singer. As part sildroher, for Ulla, music is a form of magic that she can use to summon storms, create fantastic objects, and even convert herself into a human.

Signy was Ulla's best friend and singing partner. She and Roffe killed an innocent child to make fire underwater with Ulla's knife, rendering Ulla unable to return to the sea.

Ulla is Aleksander's half-sister via their late mother, Baghra.

Roffe was Ulla's friend prior to Signy's betrayal.

Art by Sara Kipin from The Language of Thorns 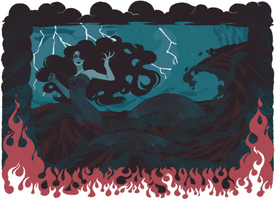 Ulla in human form from The Language of Thorns 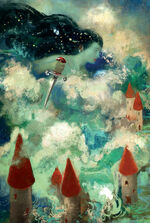