The volcra were one of the many creatures living in the Shadow Fold that feasted on human flesh and tended to move in small flocks. After the Fold was finally parted, the volcra numbers greatly diminish.

Volcra have long, dirty claws, leathery wings, and rows of razor-sharp teeth. When wounded, they bleed black. They are also blind from living in the Fold for so long but are said to be able to smell human blood from miles away.

The volcra were created by the Dark Heretic while he was creating the Fold. The volcra used to be human long ago, but the Fold changed them into monsters.

The volcra assault the First Army during a failed expedition across the Shadow Fold. As the monsters overwhelm a mapmaker named Alina Starkov and a soldier named Malyen Oretsev, Alina's latent Grisha powers awaken in a burst of light that frightens the volcra away.

Later, Baghra reveals to Alina of the volcra's true origins, a mistake and unforeseen consequence of the Darkling. Baghra calls them "his punishment, a living testimony to his arrogance."

Several volcra attack the Hummingbird while it crosses the Fold.

The volcra attempt to swarm the Bittern, but are forced out by Alina's light shield. When the Fold is later destroyed by Alina, the weakened volcra, robbed of their protection, become the targets to the combined efforts of the Grisha and the Otkazat'sya. It is implied that some volcra survived by migrating to dark areas. 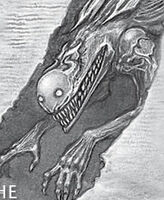 Volcra, as shown on the map of the Grishaverse
Retrieved from "https://thegrishaverse.fandom.com/wiki/Volcra?oldid=17575"
Community content is available under CC-BY-SA unless otherwise noted.