The Grishaverse
Register
Don't have an account?
Sign In
Advertisement
in: Characters (Netflix), Season 1 characters, Season 2 characters,
and 2 more
English

Edit
This article is about the character in Shadow and Bone (TV series). For the book character, see Zoya Nazyalensky.

No Mourners
"Saints become martyrs before they get to be heroes."
— Zoya Nazyalensky to Alina, No Mourners

Zoya Nazyalensky is an Etherealki soldier of the Second Army.

Crossing into the Fold[]

Zoya catches Mal in the act of stealing a bowl of grapes from the Second Army's tent. She warns him that theft could get him thrown in a hole. She then realizes that he's one of the escorts for the crossing into the Shadow Fold and reveals that she often likes to have a good tumble with a stranger whenever she gets nervous the night before a big mission. However, Mal declines her advances and leaves.

While attempting to cross the Fold, the skiff is attacked by volcra, during which time a blast of light erupts from on deck, destroying the nearby volcra.[1]

Having destroyed the volcra, the skiff makes it through the Fold without any further confrontation. They arrive at camp, where Zoya discovers Mal and Alina lying on deck unconscious and calls over a Healer. She then instructs for Alina to be taken to the general's tent, where they discover that Alina is the Sun Summoner.[2]

After a demonstration at the Grand Palace, in which Alina proves to the king that she is in fact the Sun Summoner, the Grisha embrace Alina with open arms, with the exception of Zoya, who whispers in Alina's ear that she a "half-breed" and that she "stinks of the orphanage."

Zoya is hand-picked by Alina for a round of sparring during a training session with Botkin. However, with Zoya having trained with Botkin since she was a girl and Alina having very little skills whatsoever, she is subdued by Zoya both times. It is then that Zoya adds insult to injury when she tells Alina that Mal also liked it when she put him on his back. Fueled by anger, Alina manages to land a single punch. Enraged, Zoya uses her abilities on Alina, which is strictly forbidden.[3]

Zoya accompanies General Kirigan as he questions the Conductor after he was apprehended while trying to kill Alina. After he admits that he made a deal with General Zlatan to kill Alina, the Darkling kills him.

General Kirigan requests for Zoya to join him at sundown when he leads a team in pursuit of the rogues from Ketterdam that took Alina. Zoya wonders if Alina may have left of her own free will, pointing out that Alina never fit in at the Palace. Kirigan can relate, as the King's soldiers treated him the same way because they knew he was more important than any of them. Zoya recalls how Kirigan used to call on her when his table was messy but his bed was neat. She'd help him make it the other way around. She seeks to rekindle what they once had, but General Kirigan is only interested in Alina. In a fit of rage, Zoya sends Kirigan's papers flying around the room.

Kirigan's team tracks Alina's abductors to a town in Ryevost, where Polina immediately goes after Inej, who is responsible for her brother's death. However, her irrational behavior leads to villagers being hurt, forcing Zoya to intervene and remind Polina to be smarter. Zoya then goes after Kaz but loses track of him.[4]

Zoya, General Kirigan, and Ivan track Alina and Mal to Morozova's stag. They shoot the creature with an arrow, merely wounding it. When Mal attempts to kill the stag himself, Zoya deflects his attack and Mal is then shot with an arrow. Alina comes to Mal's rescue, sending light barreling at Zoya and the others. Alina tries to protect the stag, but she can either help Mal or kill the stag. Alina chooses Mal, allowing General Kirigan to deliver the killing blow to the creature.[5]

Turning Against the Darkling[]

Zoya returns to camp with General Kirigan and Alina before boarding the skiff for Novokribirsk to supposedly destroy the Fold. However, Zoya comes to learn that General Kirigan actually intends to expand the Fold into Novokribirsk, where she has family. So, she joins forces with the Crows to help stop the Darkling, even sending a Heartrender into the darkness in order to save Inej. However, as punishment for her betrayal, the Darkling consumes the back end of the skiff with darkness, leaving them vulnerable to the volcra, who attack Zoya and Inej.

After Alina regains full control of her abilities and the Darkling is ripped apart by the volcra, they exit the Fold in Novokribirsk and gather in a clearing before parting ways, as Zoya has family in Novokribirsk that she wishes to check on. She also warns Alina that she can't go back to Ravka, as the Apparat will try to keep his power by blaming this incident on the Grisha. Alina hugs her goodbye and promises Zoya that they will reclaim their country. Zoya's final words to Alina are that Saints become martyrs before they get to be heroes, telling Alina to stay alive. [6]

Zoya is confident and ambitious, though she is also unkind, especially towards to Alina, mainly due to the fact that the Darkling preferred the Sun Summoner over her, brewing inside of Zoya an unchecked hostility and animosity.

As a Squaller, Zoya possesses the ability to manipulate the wind. She is also a skilled fighter, having been trained at the Little Palace by Botkin since she was a young girl. 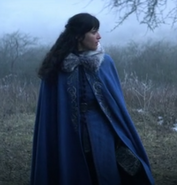 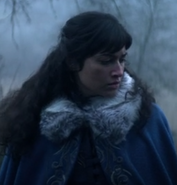